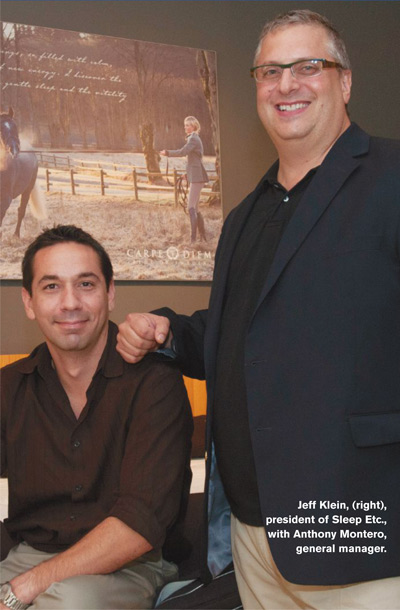 Some might consider his a David and Goliath tale, but with the Klein family's longevity and reputation, the store's broad selection of mattresses and Klein's dedication to his customers, the Sleep Etc. owner has a trio of weapons in his competitive arsenal.

The Klein name is familiar to residents of the New York metropolitan area. Klein's grandparents owned a store in New York in the late 1950s. And his uncle Herb Klein opened the first Kleinsleep store in New York in the 1950s, growing the chain to some 35 stores over the course of several decades. Klein's father opened two sleep shops in the 1970s - one in Norwalk and one in Stamford.

Even though Klein worked in the stores part time when he was in high school and college, he says he never had any intention of going into the furniture or mattress business. But after college, he briefly managed one of his uncle's stores.

"I just enjoyed it and improved the store greatly," he says. So, when his father began entertaining thoughts of retirement, Klein bought his two stores in 1993.

Since then, Klein has made significant changes to the relatively small sleep shops. First, he and his brother Steve, who was involved with the store for a while, changed the name from Kleinsleep to Sleep Etc.

"The Kleinsleep name was owned by my uncle and we decided at the time that we would be better off not being part of a chain," Klein says. "We wanted the flexibility to run the business the way we saw fit, from merchandising to marketing. I guess we wanted to put our own stamp on the business that the previous generation had built."

Today, the Sleep Etc. exterior remains much the way it was when Klein's father opened it, except for the sign in the front bearing the new name. The 3,500-square-foot store in Norwalk sits in a blue-collar neighborhood surrounded by strip shopping centers and restaurants. In the significantly larger city of Stamford, the 3,000-square-footstore is in a slightly more upscale commercial area.

Klein subscribes to a less-is-more philosophy, which is immediately obvious when shoppers walk through the door. The store is scrupulously clean with a crisp, open appearance. There are point-of-purchase signs facing outward on the glass storefront windows, but Klein says he tries not to overcrowd the inside with them. Beds are neatly organized into rows, with few headboards. Klein's wife, a theater scene designer, suggested he remove most of them.

"We felt they chopped up the way the store looked," he says. "It made it look cluttered and smaller. We have very little in the way of posters and banners. We don't have balloons."

Because Klein has expanded the product selection and slanted toward higher-end mattresses in recent years, he has divided the showroom into two sections. Occupying about two-thirds of the showroom are what Klein describes as "traditional" mattresses - innerspring and specialty foam bedding - sold in many sleep shops.

The remaining one-third showcases his niche - Carpe Diem Beds, a high-end brand of Swedish mattresses carried by few U.S. retailers. Overall, price points range widely - from $399 to $30,000. Annual sales are in the $3 million to $5 million range.

The "traditional" side of the showroom has 30 models on the floor, in a familiar arrangement. In an effort to dress up that area a little more, Klein says he's hanging oversized lifestyle images in uniform frames "so that it will be colorful and interesting."

Until recently, a wall unit divided the two sides of the store. Klein planned to replace it, but when he removed the old one, he says, "it was like breathing a breath of fresh air. It made the whole store feel larger and less claustrophobic, so we left it that way. Definitely, with every change we make, it's going in the less-is-more direction."

The presentation of eight Carpe Diem models is strikingly different. The sleek area has a more contemporary design, with hardwood floors, spotlights, back lighting and oversized lifestyle graphics in modern, metal frames. Beds are spaced farther apart to give the customer adequate room to examine each model. (Plus, Sleep Etc. is a lowtraffic store, Klein says, with usually only a couple of customers in the store at a time, so privacy for testing beds is usually not an issue.)

"I am proud of the Carpe Diem side of the store," Klein says. "I think it's beautiful."

One challenge Klein routinely faces is space, or rather the lack of it. With small showrooms, he finds his options for display limited. But it's a limitation he's willing to accept. While Klein wishes his stores were larger, he adheres to the adage that if it's not broken, don't fix it, and he's not likely to relocate into larger spaces anytime soon.

"What keeps me here is that we've been here for so many years. I'm nervous about losing that momentum," he says.

What Klein lacks in square footage he makes up for in selection. Customers can choose from a wide variety of brands, including Englander, Simmons, Symbol and Tempur-Pedic. The store also carries private-label mattresses from Symbol and Englander, which is the retailer's best-selling bed. Carpe Diem is the only Swedish sleep system the store carries.

Though Sleep Etc.'s price points vary widely, Klein caters to the higher end. His line of Simmons, for example, includes a selection of luxury Beautyrest Black models, and his Englander offerings include the eco-friendly Nature's Finest latex mattress. 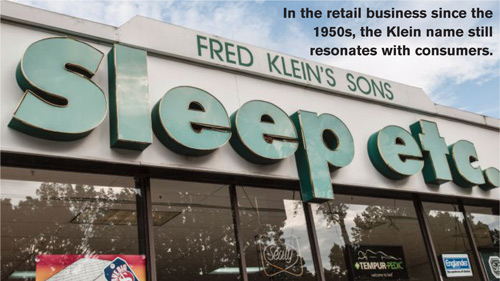 "Although we offer a selection at every price point - from $399 for a queen set - we only have one bed at $399," Klein says. "Whereas some stores might have a very heavy selection of medium- to low-end beds, I have a couple of beds at the lower end just to make sure they're available and might be a good match for somebody, but our typical customer is spending more." Carpe Diem mattresses range from $7,000 to $30,000. The average ticket among other brands is $2,000.

Klein adds that Sleep Etc. has been able to attract - and keep - affluent customers from throughout the tri-state area because "they know that our display is slanted toward the higher end and our selection is at the higher end."

In addition to bed sets, Sleep Etc. carries an assortment of mostly private-label down pillows from the United States and Europe, as well as mattress protectors from companies including Protect-A-Bed. He also sells and distributes a chiropractor-designed pillow called the Chiro Pillow, which is a contour pillow with an adjustable aspect to it.

"We do have some nice accessories and that's an important part of our business," Klein says.

Like most of Klein's retail philosophy, his approach to marketing, sales and promotions is understated. He does little advertising in conventional media; the majority of his marketing is online, which he says is critical to attracting customers around and outside the metro area. He doesn't host huge sales and promotional events. What drives his business is word-of-mouth.

"We've been here for 40 years and it is specific merchandise," Klein says.

Half of the store's high-end business can be attributed to Klein's ability to convert walk-ins into high-ticket sales. He says those sales come from customers who enter the store intending to buy a more moderately priced, "traditional" mattress, unaware that Sleep Etc. carries ultra-luxury beds.

"But when we expose them to luxury, they think it's right for them," he says. "When you educate shoppers on the different kinds of technologies and brands that are available, they are more likely to select what you recommend for them."

Customer care is a priority at Sleep Etc. and the retailer's sales strategy is low pressure. On the sales floor, Klein takes a consultative selling approach so customers don't feel pressured to make a selection. He spends a considerable amount of time with each customer, gaining her trust by asking qualifying questions, showing a genuine interest in matching her with the correct bed and explaining a mattress' pros and cons so she can make an educated decision.

"I'm quick to point out, for example, that the lowest-priced Carpe Diem mattress is the same quality as the highest priced, so if the lower-priced model feels more comfortable and gives them better support than the model above it, that's the reason to choose the lower-priced one," he says. "What I might give away in dollars in that sale I make up in volume because our customers like us and they send their friends and family to us."

To Klein, sales training is an "attitude adjustment."

"If the customer doesn't trust you, they won't buy from you, so be completely honest and educational and informative," he says. "Prove to them you're a good resource and someone they should trust."

Customer service continues after the sale. Klein offers a three-month guarantee and says his nine employees "pitch in to get the job done."

"We have our responsibilities, but we take the approach that if you have something to do, you just get it done," he says. "We'll do what needs to get done, even if I have to go to a customer's house to check things out to make sure no mistakes are made." 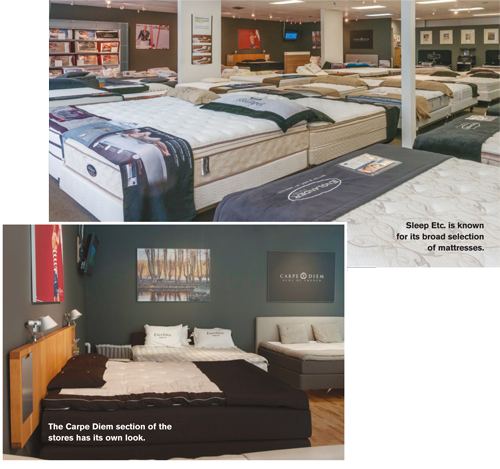 Klein continues: "My father's philosophy, which has always stuck with me, was to be honest with people and offer a good value, and they will want to buy from you."

Jeff Klein has been so successful selling Carpe Diem Beds that three years ago, he became the brand's U.S. distributor.

"I'm responsible for everything from shipping to warehousing to marketing to shows to maintaining warranties," he says. "Having a piece of the distribution makes me feel like I have expanded my business."

Sleeping on the job

Sometimes owning your own business and being a family man means merging the two - bringing family into work. That's exactly what Jeff Klein did on a recent Saturday evening. He took his 4-year-old daughter, 13-year-old niece and 14-year-old nephew to his store for a slumber party.

"We had a sleepover in the store because they thought it would be fun," he says. "And I got some work done after they fell asleep."