Carpe Diem Beds will be one of the major sponsors of Nordea Masters 2012 which will take place June 6–9 at Bro Hof Slott outside of Stockholm.

Scandinavian Masters were played for the first time back in ’91 and very quickly became one of the most prestigious tournaments in the PGA European Tour. Today the tournament is played under the Nordea Masters name and these days is one of the biggest events in terms of public attendance of the more than 50 tournaments on the European Tour. Only the British Open with its 139 years of tradition attracts more spectators.

Bro Hof Slott hosted the tournament for the second time in 2011 – and it was the second year running that a Swede won. Alexander Norén finished the Sunday with a safe 11 shot lead over Bubba Watson. He kept his game together in the face of stiff winds and won with a seven-shot margin in front of tens of thousands of spectators in Victory Valley.

This year the public at Bro Hof will get the chance to see the distinguished world-class player Lee Westwood. The 39-year-old Englishman has 26 tournament victories behind him and in November 2010 he took over as the world’s number one golfer ending Tiger Woods’ fantastic reign of five and a half years at the top. Westwood held on to first place for 22 weeks. Lee Westwood will be recalling sweet memories when he returns to the tournament where he won his first professional game 16 years ago. In those days the tournament was called Volvo Scandinavian Masters and was held at Forsgården outside Gothenburg. Westwood, who was only 23, won after a hair-raising playoff where he beat his countrymen Russell Claydon and Paul Broadhurst.Right now (at the beginning of March) Lee Westwood is ranked number 3 in the world.

See you at Bro Hof this summer! 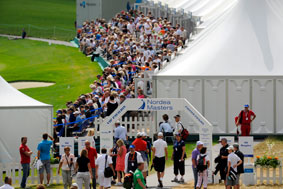